Chrysoprase is a translucent species of chalcedony of green color. Famous for the stone came thanks to Alexander of Macedonia. The commander considered him his talisman and never parted with him. He wore the miner on his belt. According to legend, Alexander took a stone while bathing, and he abducted by a snake. The next day the king killed in battle.

Maybe, that is why chrysoprase is a mascot-gemstone of the 28 lunar day. It is the period of increased load. This means that chrysoprase gets the greatest power on the 13th day after Full Moon, and any rituals with it will be more effective at this time.

The popularity of jewelry with chrysoprase is unequal in different periods of time. They appreciated in the Ancient World – Egypt, Greece, Rome.

On the East believed that in the hands of false people chrysoprase very darkens. Honest people mineral warned of imminent danger of turbidity. Indian magicians believed that the gem protects against envy, evil eye, spoilage.

In medieval Europe chrysoprase considered a symbol of success, luck and friendship, a stone. Gem used as an amulet, which protects from negative energy. The stone became a talisman, protecting from dangers and attracting good people.

The next wave of popularity of products with mineral rose in the middle of the XVIII century and has not weakened until now.

The main fields located in Australia. 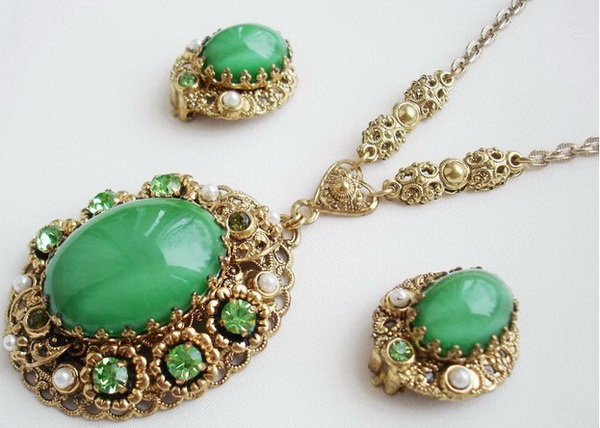 The magical properties of chrysoprase in lithotherapy

Lithotherapists use stone for pains in the throat and ears, asthma attacks and with other ailments the respiratory system.

The sheer positive effect of the mineral on the function of the thyroid gland and the organs of vision.

According to lithotherapists, chrysoprase facilitates the patient’s condition in infections and various inflammations.

It also helps to treat depression and smooths the manifestations of menopause.

The main method of applying chrysoprase is wearing jewelry with it. But folk healers do not recommend the use of stone on a permanent basis for medicinal purposes. Prolonged contact with the mineral can affect the health status. May cause the formation of stones in the gallbladder.

A stone can charged with water. To do this, a piece of chrysoprase dropped into the liquid container and kept in sunlight for 4-5 hours. Such water can used as a medicine for non-infectious colds.

Chrysoprase energetics and its impact on humans

Chrysoprase considered a stone of innovators. Favorable for any new business. It is also the best mascot for business people who work with large sums of money. But it does not work well for a person who likes to over-exert risk.

Thanks to chrysoprase, a person can overcome fears, overcome difficult situations.

The stone will save you from accidents, injuries, unforeseen circumstances.

Gem helps to cope with grievances, distrust towards friends or close people. The stone helps to stop anger, to cool emotions. He brings peace and complete peace into the soul of his master.

The magical properties of chrysoprase will have their positive effect only if the stone is in the hands of an honest, kind person. If the person is evil, capable of despicable deeds, then chrysoprase will not help him.

On the 28th lunar day, when we need changes, we need an assistant like chrysoprase! Do not miss this powerful magical time with the Moon Calendar: