Jade in translation from the Greek «lapis nephriticus» means «kidney stone». This is how it was long called in European countries, but later it got its modern name.

Jade differs in color, which depends on the content of various impurities in it. More common is a green mineral. The most valuable stones are red and blue jade. A gem with the effect of «tiger’s eye» considered unique.

Maybe, that is why jade is a mascot-gemstone of the 26 lunar day. It is the period following natural rhythms. This means that jade gets the greatest power on the 11th day after Full Moon, and any rituals with it will be more effective at this time.

The stone became famous even one thousand years ago! In ancient times, jade valued in almost all corners of the earth.

The Aztecs put dead gems in their mouths, hoping for their early resurrection. From it created magic masks, which helped to communicate with spirits.

It was this mineral that became the national stone of China. Jade for the Chinese was the stone of Heaven, Earth, Wisdom, Eternity, Immortality. They decorated with palaces and imperial tombs. All cult temple complexes in China are full of sculptures from this gem. In the famous Temple of the Jade Buddha there are still preserved 2 huge sculptures of the Buddha. They made of whole pieces of white jade. It is curious that many women in China have a hieroglyph «jade» in their name. Until the invention of porcelain, almost all utensils, including cups, made in China from a green mineral!

In all the East, jade considered a «victory stone» . Amulets from this stone strengthened the vital forces and protected from the evil eye.

Green jade recognized by medicine as a healing stone.

Lithotherapists apply the mineral to the area of ​​the stomach or near the kidneys. Nephrite acts as a prolonged warming compress and relieves pain.

The stone normalizes the pressure, improves the work of the lungs and heart. It prevents hair from drying out, strengthens the liver, stomach, heart.

The mineral should washed in soapy water. After that, the soap residue should rinsed under running water. It is enough to wipe the stone with a damp soft cloth. Keep jade products better in individual cases. 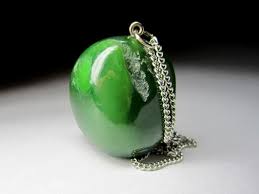 Jade magical properties and its impact on humans

Gem has a strong energy and feels the owner’s desire for changes in life. Works as an «equalizer», but in a sharp form. Jade puts a person in front of the conditions that make him change. So, not everyone can wear it, but only those people who learn from their lives.

Jade is a kind of indicator of the actions of a person. If the stone begins to grow dull or darken, then the owner should think about the correctness of the choice of life path, rethink what he has done. It is also a mineral of justice and good intentions. It makes a person change for the better.

Nephrite is good to have in the house for those who are not confident in their abilities. It helps to focus and achieve what you want.

Also, the stability and tranquility of jade used for amulet at burial.

On the 26th lunar day, when we need a smooth transition from apathy to new goals, we need an assistant like jade! Do not miss this powerful magical time with the Moon Calendar: