Winter Solstice December 21, 2020, is an unusually significant day in astrology. It is a real transition to a new era, a new round of evolution at the cosmic level! Let’s take a closer look at what will happen to the planets on this day and why it is so important.

The Winter Solstice itself is an important moment of the year. From this day, the lengthening of the daylight hours and the reduction of the dark ones begins. Our ancestors celebrated this day as the birth of the new year. The Winter Solstice was associated with rebirth, a new beginning, accompanied by a happy celebration. In 2020, this phenomenon symbolizes a new beginning also thanks to the great conjunction of Jupiter and Saturn. Therefore, we can call this solstice the solstice squared 🙂

Astrologers always pay attention to the Sign of the Zodiac, in which this or that cosmic phenomenon occurs. At the moment of the Winter Solstice December 21, 2020, the Sun will move from Sagittarius to Capricorn. And Capricorn, in turn, symbolizes professionalism, disciplined work, planning, and achieving goals. Considering all the information about this day, here is my opinion. Capricorn will help us to achieve great goals that were previously unattainable for us. However, we need to harmonize and synchronize ourselves with the energies of the Universe for this.

Great Conjunction of Jupiter and Saturn at the Winter Solstice December 21, 2020

In addition to the Winter Solstice, December 21, 2020, the great conjunction of Jupiter and Saturn in Aquarius will occur. The last such close conjunction of these space giants happened on July 16, 1623! So, without a doubt, this is very important and heralds big changes and events.

By the way, Christmas is coming soon! And you know what? Some people believe that the Star of Bethlehem, symbolizing the birth of Jesus, was the conjunction of Jupiter and Saturn in the sign of Pisces. The conjunction of these two major planets can be seen with the naked eye and resemble a big bright star. And the sign of Pisces is responsible for spirituality, compassion, connection with the higher worlds.

In December 2020, the great conjunction will take place in Aquarius, responsible for innovation, intelligence, communication, the idea of ​​human equality. Interestingly, Jupiter and Saturn will square Uranus, located in the sign of Taurus. Taurus, in turn, is an earthly, conservative, materialistic sign of the Zodiac. At the level of this square, it is possible to diagnose the coming conflict between generations, traditions and innovations, authorities and people. But in fact, everything is even deeper.

The great conjunctions do not happen often. But in this case, we are dealing with a particularly rare great conjunction – one that occurs once per 200 years. This phenomenon is called the Grand Mutation, and it is characterized by the beginning of a series of Jupiter-Saturn conjunctions in the Zodiac Signs of one element.

So, the previous conjunctions took place in earth signs. Then, we tasted the element of air during the conjunction in Libra – and then, in the 1980s, the first trends of the future appeared. The elements of the earth highlighted stability, practicality, logic, laws, rules, hard work, financial literacy, materialism. And so the world lived, achieved success, worked. The element of air is absolutely different. It is responsible for creativity, intelligence, communication, information, innovation. 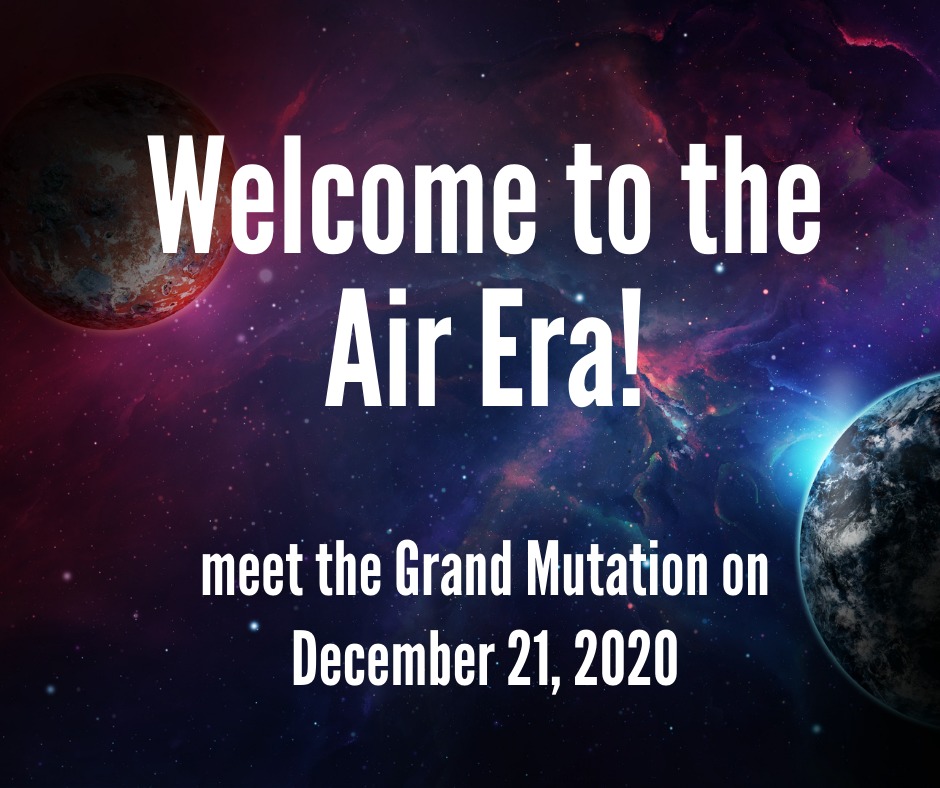 By analogy, the earth can look like an elderly man who has honed his skills all his life, followed the rules and worked hard on a schedule to earn what he has. And the air is a teen blogger who filmed a video of his dance, posted it on the Internet, and suddenly made more money than the elderly man described above. An elderly hard worker does not understand a young creative person. The Earth and the Air are very different. And this does not mean that one of them is bad: everything has its time.

For people to have time to rebuild themselves in a new way, such transitions occur very gradually. Since the 80s, we have already changed our life: we have the Internet and social networks now! But together with the Winter Solstice December 21, 2020, we will finally and irrevocably move into the Air Era for the next 200 years. It is the Grand Mutation.

So, tune in to the wave of new life. Don’t hold on to a past that has already died. Be flexible. Develop your intelligence, adaptability, creativity, communication skills. And, of course, rejoice, because the holidays, rebirth, and lightness are coming! 🙂