Full Moon January 28, 2021, is a significant and pretty tense cosmic event. However, any astrological phenomenon is aimed at the greater good and helps us, humans, to evolve. Let’s learn what tasks this Full Moon in Leo sets before us, how it can help us, and what threats it brings.

The general meaning of the Full Moon in astrology

If you have read my articles before, you already know that we use a certain algorithm when considering any astrological event. And the first thing we do is pay attention to its very essence. What is a Full Moon in essence? It is the opposition of the Moon and the Sun. Since these objects are far away and opposite each other, the Sun can completely illuminate the lunar disk.

Now let’s move on to a philosophical understanding of the opposition. This situation is a symbol of some kind of confrontation. And from any confrontation, there are only two ways out: to fight until one of the opponents wins; or find a balance, synergy, a win-win solution for both sides. Which way out we choose depends on the level of our spiritual development.

The second meaning of the Full Moon lies in the nature of the lunar cycles. The Full Moon is the middle of the lunar month, the beginning of the lunar autumn. And if we draw a parallel with the cycles of the seasons and periods of a person’s life, then the Full Moon symbolizes the moment, followed by maturity and harvest. In other words, this point of the month is given to us to see the results of our previous actions, analyze them, and become wiser and more mature.

Well, and one more. At the Full Moon, the Moon is fully illuminated, which gives it unprecedented power and energy. And again, there are two types of reactions to this. Either not withstand this flow of energy, let it knock you down, or enlist the Moon’s support and be nourished by its power.

The meanings of the Full Moon as a phenomenon:
1. The moment of confrontation through which a person evolves, choosing the achievement of a win-win result instead of a win-lose scenario.
2. The ability to see the results of our actions, draw conclusions, and correct behavior.
3. A day of tremendous energy, which a person learns to manage for his own good.

Now that we have considered the meaning of the Full Moon in general, let’s look at the distinctive features of this particular wolf moon, which will happen on January 28, 2021. And the first thing we look at is the Full Moon Zodiac Sign.

Perhaps, I would look at two Signs of the Zodiac, because the phenomenon of the Full Moon is created by two objects: the Moon and the Sun. This time, the Moon is in Leo, and the Sun is in Aquarius. Why is it important? Because it is between these signs the very confrontation takes place, from which we need to look for a win-win way out.

Zodiac Signs have a unique meaning and are responsible for certain character traits, areas of life, concepts. So, Leo is creativity, leadership, love, children and brainchildren, hobbies, and entertainment. Leo is responsible for the personal interests and our Ego. Aquarius, on the contrary, is responsible for the interests of society, the collective, and humanity as a whole. It symbolizes the latest inventions, like-minded people, dreams, equality, and freedom. With this information, we better understand between which extremes we must seek balance on this Full Moon.

Namely: between an individual and a collective, between love and freedom. At the lower levels of spiritual development, such opposition results in conflicts due to the collision of egoism with the interests of society, the perception of love as dependence. At the highest levels, the individual and the team interact as a director and a film crew, resulting in a creative masterpiece. And the highest love manifests itself in the fact that partners, thanks to each other, gain more freedom to manifest themselves.

The symbol of this Full Moon can be the Tarot Card Strength, which tells us about such a balance. 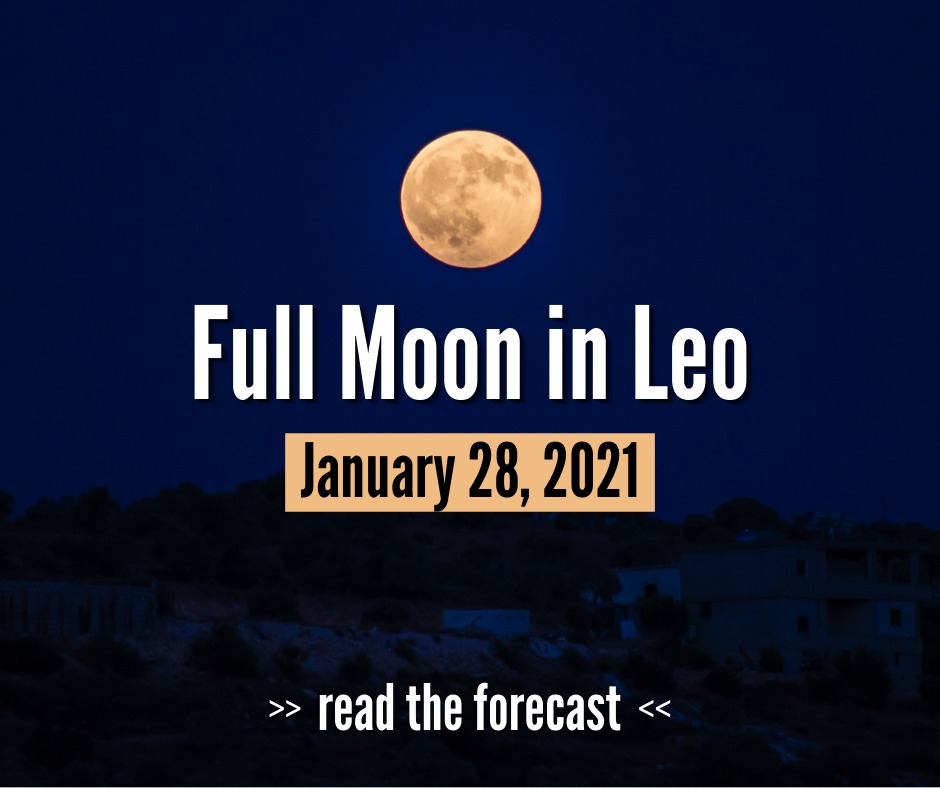 Aspects of the planets participating in the Full Moon January 28, 2021

However, not only the Moon and the Sun participate in the Full Moon. Many things always happen in the sky, and the Full Moon with its energy only enhances the influence of the other planets’ aspects.

Let’s start with the bad news. Now you will find out why I called January 28 a tense day. Since January 20, Uranus passes between Mars and the Black Moon, forming conjunctions with them in the Sign of Taurus. This whole company creates a T-square to the Full Moon’s axis – a very tense aspect. On the other side of this T-square are the Sun, Jupiter, and Saturn. It means that as many as seven planets are participating in this cosmic battle. And this battle is all about the same. The desire of Uranus to destroy systems and overthrow the authorities, the desire of Mars to gain freedom and independence through violence and aggression. At the material level, such energies often spill over into protest movements, revolutions, failures of equipment and electricity, waves of indignation in social media.

In the personal life of each of us, this aspect will increase the degree of irritability. Most likely, conflicts will be in close relationships, but about money (since Taurus plays an active role).

But there is good news too! Moon, Chiron, and the White Moon – our cosmic guardian angel – create the positive aspect in the sky. They tell us: if we show our best traits, we can resolve all conflicts by achieving a win-win. The conjunction of the Sun with Jupiter will also help us in this, which will point us to new opportunities in our life, new ways of development.

Let’s summarize. What tasks does the Full Moon January 28, 2021, set for us, and what tips and hints does it give us?

Well, firstly, we need to thoroughly analyze our relationship with society, team, our love partners, and children. In these relationships, we need to find a balance between meeting our own needs and the needs of others. Better yet, make sure that this relationship not only meets the needs of all parties but also creates something more as a result.

Secondly, for this goal to be attainable, it is very important to remain calm and not give in to emotions. On the day of the Full Moon itself, it is better not to arrange negotiations at all, postpone them for later. Take time to work on yourself, meditation, lunar rituals.

Thirdly, observe carefully what happens on that day. The Full Moon shows you the results of your past actions and ways to correct your behavior. Pay attention to the signs and conclude.

Get personalized tips for each Moon Phase in our Moon Calendar: