Buck Full Moon July 5, 2020, ends this summer eclipse season. It says: “Ready, Set, Go!” and opens the doors of the workshop of the Future in front of us. It will fill us with creative energy and give us the long-awaited freedom. But first things first.

So, the July 5 lunar eclipse is the last eclipse in this cycle. It is no accident that the eclipse seasons are also called “corridors” in many languages. In a metaphorical sense, they remind us of the tunnels at the end of which the light of a new life burns. Eclipse seasons are a kind of transition from one era to another, both on a global world-wide scale and for each person.

And so we come to the end of the corridor. On July 5th, the day of the Full Moon in Capricorn, we can already see the bright light of the new reality that awaits us outside.

By the way, this lunar eclipse does not just close the season. It is also the last eclipse on the Cancer-Capricorn axis. Subsequent eclipses will occur on the Gemini-Sagittarius axis, which has already visited us on June 5th. You can learn more about the meaning of this change from this article.

Parade of Planets and games with the time

Just before the lunar eclipse, another interesting and outstanding space event takes place. The Parade of Planets is a celebration of the solar system scale! On July 4th, all 9 participants will line up in one row, showing us universal harmony and coherence. This phenomenon reminds us of the unity of all that exists, of the fact that the universal mechanisms are established clearly and logically. The fact that even the “inharmonious” aspects of the planets are designed for some higher purpose.

Planets line up to celebrate a new beginning. Ready, Set, Go! Quite a bit, and they will begin to move in the space of renewed energies that permeate our entire world, you, and me.

Let us celebrate along with the whole Universe!

And do not worry about the fact that many planets these days are in retrograde motion. Namely – Mercury, Jupiter, Saturn, Neptune, and Pluto. On the contrary, pay attention to this phenomenon.

We, humans, are used to think that time is linear, striving from the past to the future. But there are other concepts worthy of attention. For example, the theory that an infinite number of timelines exist in space SIMULTANEOUSLY.

Therefore, I don’t like the mundane and petty interpretation of retro planets. It usually tells us about a return to something from the past. Isn’t it better to develop your consciousness by trying to rethink the very concept of time? And July 4-5, 2020, the days of the Planet Parade and Lunar Eclipse are the best suited for such an expansion of consciousness.

The time has come to examine the Full Moon in Capricorn July 5, 2020, chart in more detail. Indeed, all the participating planets influence our lives. (Not just the Moon, the Sun, and their Zodiac Signs)

The Powerful Mars and Venus Union

Good news! Mars finally left the sign of Pisces and entered the Aries Zodiac Sign. Here he feels at home, he is full of energy and strength for active actions, and generously share them with us! Meanwhile, Venus goes into direct motion and forms a magnificent sextile with a peppy Mars. Not only are both planets happy, strong, and energetic, but they are also in excellent relations with each other.

Remember that Venus is our desire, and Mars is the ability to achieve what we want? Obviously, the favorable aspect between them promises us the embodiment of our favorite dreams. Also, this position and condition of the planets promise harmony and euphoria in the love relationship between men and women.

Jupiter and Pluto in the Millionaire Aspect

Two slow planets, Jupiter and Pluto, are in conjunction in the sign of the Full Moon – Capricorn. Astrologers call such a phenomenon the “Millionaire aspect,” and it portends an unprecedented expansion of boundaries, capabilities, and thinking. Big goals, large-scale tasks, multi-million dollar transactions – it is all about this. Besides, this aspect is an excellent occasion to try to take a helicopter view. It can be a rethinking of anything because the millionaire aspect is not only about money.

…And other good news

This time, not only Venus and Mars delight us with a favorable aspect. Saturn also makes a sextile to Mars, thereby giving him a little bit of discipline and organization, which he lacks to realize all his desires. Venus, meanwhile, forms a sextile with Chiron, portending success in negotiations and the resolution of any conflicts.

Neptune is rich by two sextiles at once – with Jupiter and Pluto. He supports the theme of desires fulfillment and notes that dreams will come true not only in the lives of individuals but also for humanity as a whole.

Uranus, which forms a trine to the Lunar Eclipse July 5 axis, promises us a renewal of life and unexpected surprises. In addition, he supports Mercury, which is now pretty weak in the sign of Cancer and the retro movement. Such a Mercury makes our thoughts blurred and torn, so it is better not to try to analyze and build logical chains in this period. It is better to trust Uranus – in other words, your intuition. And, of course, the internal energy, which seeks to break out and “just do it”! 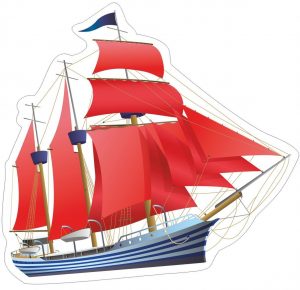 Tip of the Lenormand deck

Of course, the deck, as always, confirms and emphasizes the main motive of the sky chart. This beautiful card radiates the energy of novelty, lightness, brightness, and activity:

Firstly, the ship symbolizes MOVEMENT. In this case, it is an active but easy movement in the stream, when the wind fills the sails, and your ship rushes to new impressions, goals, unexplored adventures. Now the Universe is on your side and directs you to where you like, where you need to. So LIFT YOUR SAILS!

Secondly, the ship is a journey and new discoveries. It echoes the Parade of planets and the end of the eclipse season. Here it is – A NEW BEGINNING!

And thirdly, my card depicts a ship with scarlet sails, which reminds us of Alexander Green’s book of the same name, “Scarlet Sails”. If you remember, the main character really believed that one day the prince would come for her on a ship with scarlet sails. And her dream came true. If you want to learn how exactly this happened, read the story. Meanwhile, I see valuable advice here: TELL THE UNIVERSE ABOUT YOUR DREAM AND BELIEVE UNTIL THE FULFILLMENT!

And remember: I love you and wish you all the best. Happy exit from the eclipse season! 🙂

Get personalized tips for each Moon Phase in our Moon Calendar: