Mercury in Pisces is in the place of its fall. This means that he feels uncomfortable and cannot show his best features. However, do not rush to number this position in the list of “bad” ones. Generally, I am protesting the separation of planets, their positions and zodiac signs into “bad” and “good”. In my opinion, each of them is unique and beautiful in its own way. It is only important to find yourself and discover your own potential.

Mercury in the natal chart determines how a person thinks, how he communicates. In addition, this planet has long been known as the patron of commerce, travel, merchants. Let’s take a look at how Mercury in Pisces affects thinking, communication, and wealth of a person.

Mercury in Pisces in the natal chart – thinking

The place of the fall of Mercury takes away his clear logic, attentiveness, the ability to distinguish reality from illusions. On the other hand, Pisces endows a person with developed imagination and great sensitivity. He is able to absorb large amounts of information at a subconscious level, completely without getting tired of it. He studies through sensual experience – not only his own but also someone else’s. Such a person has the gift of empathy.

Mercury in Pisces gives the person a powerful intuition! However, there is a catch. Hypersensitivity is fraught with easy suggestibility. Feeling other people literally, such a person can confuse his own thoughts and judgments with other peoples’ ones. A developed fantasy sometimes makes him confuse the real and the fictional.

I remembered the movie “Big Fish“. Funny, it is just about this position of Mercury 🙂

By the way, in spite of the weak ability to concentrate, such people are able to memorize forever the many little things that evoke emotions. They are artists living in a fairy world of fantasy and feelings.

Communication in the natal chart

In communication, Mercury in Pisces is a very sweet, friendly, sensitive companion. The ability to intuitively read the state of others makes him a great friend with the psychologist abilities. Before you accuse him of wandering in the clouds and weak-mindedness, remember your favorite fantastic films or fairy tales. This man really has a connection with the mystical parallel worlds. And if something is unusual for you, it does not mean that it is bad.

Mercury in Pisces is actually very different from most people. Therefore, it is sometimes difficult for him to express his thoughts in words that are understandable to those around him. He thinks in images that can be easily expressed in art, but difficult to translate into human language.

Remember that such a person is very impressionable and sensitive. If someone of your loved ones has Mercury in Pisces, protect him. Don’t let him overwork, because Pisces have little vital energy. After active communication with a large number of people, he should renew in solitude. He is easy to manipulate. Do not let him wallow in negative emotions! After all, then he will find an outlet in the dependencies such as alcohol or computer games. 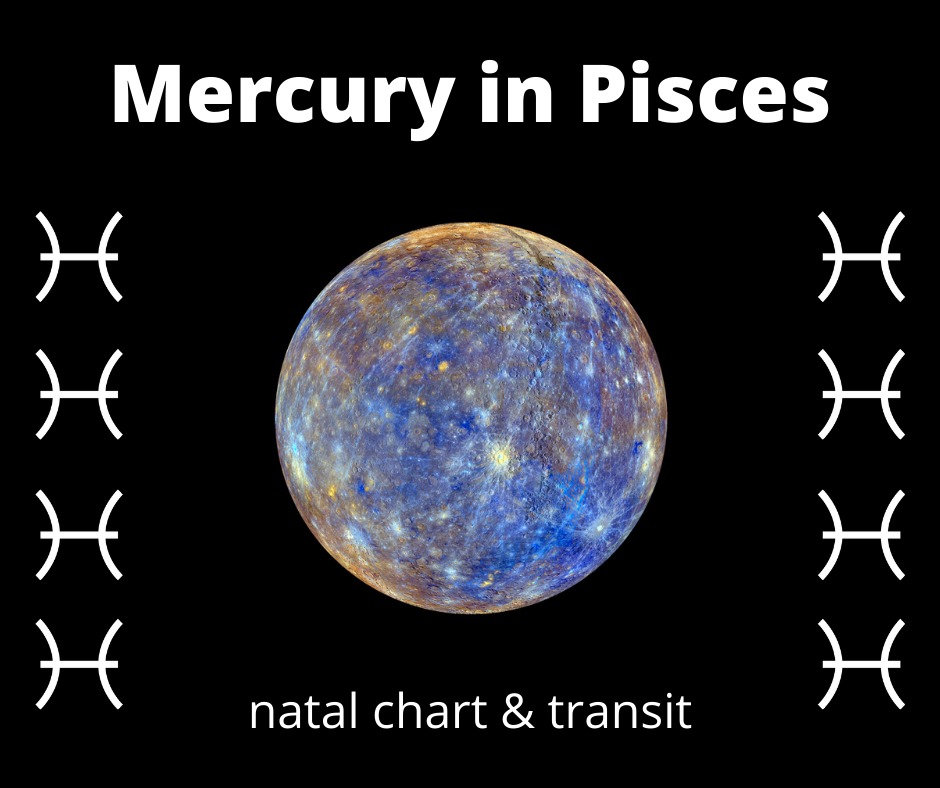 Mercury in Pisces in the natal chart – wealth

The natal chart of a person tells him the path to a happy life in all its manifestations. Mercury in the natal chart indicates a person’s path to wealth. And the path of Mercury in Pisces is, of course, art! Such a person receives a double benefit from creativity. First, art therapy cures his sensitive soul. Secondly, his works of art will be definitely highly appreciated.

In addition, such a person can become a successful psychologist or actor. After all, no one else understands people so deep, so from the inside, as Mercury in Pisces does.

If this position is present in your natal chart, do not limit yourself to the framework of one profession. You are not fit to work in the system, on a rigid schedule. Freedom and flight of imagination – it is all about you.

During this transit, we all become introverts. We immerse ourselves in our own feelings, emotions, fantasies. Sometimes – in illusion, we hyperbolize sadness and dramatize events. It is important to use this time for development, spiritual practices, meditations. Otherwise, the desire to escape and hide may lead us to bad places.

This period is not suitable for routine work requiring attention. Pisces blur everything. Focusing is very difficult. Errors in reports, calculations, documents are possible. But, Mercury in Pisces is perfect for the creativity of any kind, enjoying art, relaxing and attending psychological training. Also, you can get interested in esoteric, mystical teachings, religion.

Remember that at this time we are suggestible. There are always people who want to manipulate someone. Therefore, it is better to spend time alone or with the closest ones. Free your imagination, let it materialize in something beautiful.