Mercury in Aquarius characterizes thinking, communication, the path to wealth, and travel of person. On these concepts, airy freedom-loving sign leaves its mark. Aquarius is known as an innovator, inventor, wonderful friend and unpredictable eccentric. Let’s take a closer look at what this position of Mercury gives in the natal chart and during transit.

Mercury in Aquarius in the natal chart – thinking

The thinking of such a person has bright features. Firstly, he looks at everything from the point of view of progress, improvement. He can not just come up with an idea of how to improve anything. He cannot NOT to come up with it because this is his way of seeing things.

Mercury in Aquarius always craves novelty, such a mind eagerly absorbs new information. At the same time, old concepts do not interest him. Perhaps that is why the memory of such a person is not very good.

But, secondly, this mind is able to think globally and farsightedly. Mercury in Aquarius thinks on the scale of the planet, the universe, not just himself. To others, he may seem to be a dreamer divorced from reality, but he is not. Such a person is very attentive and knows how to set priorities. It is another matter that he chooses his own priorities independently; does not tolerate when something is imposed on him.

Paradoxical intellect, seeking independence. Always wants to destroy the existing order of things, because of what is similar to the anarchist. However, in fact, he had simply already thought out an improved system that would be better for everyone.

And by the way, this is the third unique feature of Mercury in Aquarius. He really knows what is best for everyone, because his mind is absolutely objective. No bias!

Communication in the natal chart

The ability to perceive the world and the people absolutely objectively makes such a person a wonderful friend. This person is hard to terrify and disappoint. It seems he is able to accept everyone as they are. Isn’t it the attitude that we all crave?

Objectivity combined with the desire to improve the world and global thinking turns him into an active humanist. This is the friend who really understands you, accepts you, helps you see the perspective, helps you in practice.

However, you will have to accept him too. So that Mercury in Aquarius does not disappear from your life, remember a few simple rules: 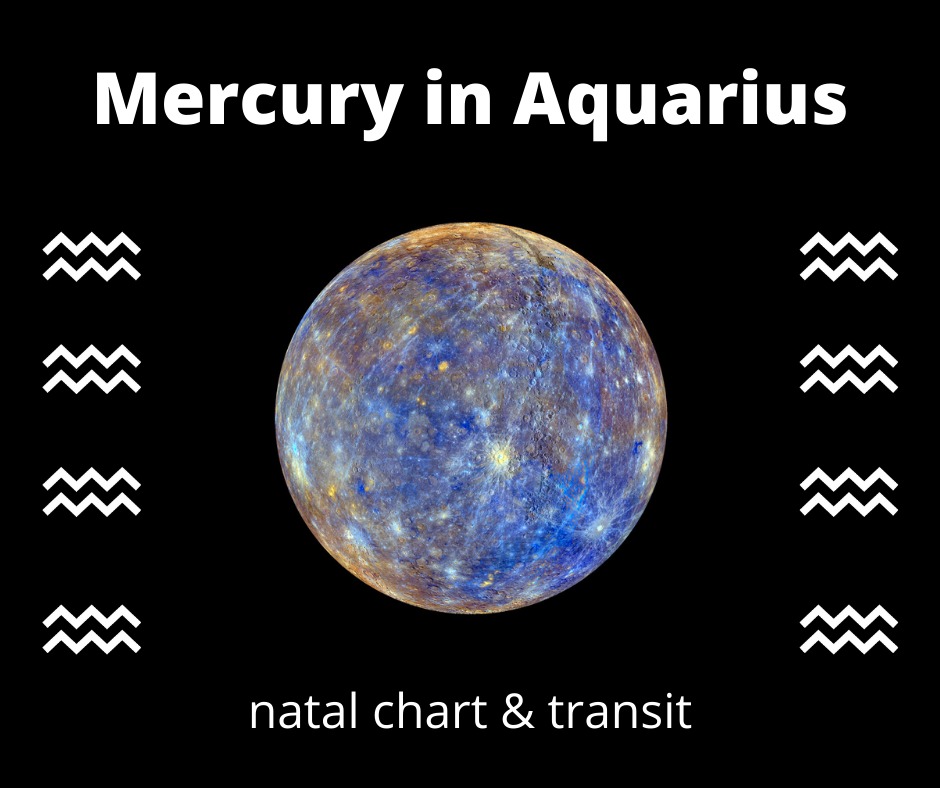 Mercury in Aquarius in the natal chart – wealth

Mercury in the natal chart of a person indicates his possible paths to material success. Since ancient times, he was considered the patron saint of merchants and trade. Mercury in Aquarius suggests that wealth awaits the individual in the areas of new technology, scientific invention, social activities.

The talents leading you to success are your revolutionary thinking, eloquence, ability to be a friend. In addition, you have pronounced organizational skills. And the innate desire for independence will sooner or later lead you to the path of entrepreneurship. Mercury in Aquarius cannot be subordinate, at least for a long time.

You have the ability to foreign languages, you are among the so-called “polyglots”. In addition, the breadth of outlook and objectivity contribute to the conduct of international business or social projects.

This is a time of communication! Friendly, direct, present. This is a period when people communicate with each other on an equal footing, regardless of status and roles. Teamwork is especially effective, be it business, sport, or volunteering.

People become more susceptible to new information, easier to learn. Of course, on such days we pay attention to technological innovations and strive to “keep up with progress.” Our thinking goes beyond the usual framework, we come to fresh original ideas, unusual solutions.
We all subconsciously wait for some kind of change, some kind of sensation. Mercury in Aquarius electrifies the air with this anticipation. And, very often, change does come.

With the negative aspects of Mercury, we also have many surprises – but unpleasant ones. People can behave very eccentric, rebel, viciously play each other. News, in this case, may be false, and new acquaintances – short-term.