Venus in Aries is a peculiar combination of female and male energy, sparkling and passionate. Venus is the ancient Roman goddess of love, creativity, and prosperity. Aries is a fire sign, the keywords of which are initiative and passion. Let’s take a closer look at this combination in the natal chart and during transit.

Venus in Aries in the natal chart – values

The most feminine and flirting planet Venus, among other things, is responsible for our values. That is, its position in the natal chart determines what is important for us, how we prioritize. Getting into the hot embrace of Aries, Venus gives a person a thirst for emotions and sensual pleasures. Vivid impressions are important for him, as well as independence, risk, and leadership.

Venus in Aries makes the personality dramatic, prone to hyperbolization. In addition, such a person is very spontaneous and changeable. All this together can be expressed in flashes of fanatical patriotism or religiosity, mad love, and social protests. In the heat of passion, he is capable of anything, tremendously persistent and strong. However, he quickly burns out. His lifestyle is the alternation of bright flashes with periods of calm.

Love and relationship in the natal chart

If a man has a Venus in Aries, he is attracted by passionate, emotional and courageous girls. Bright, risky, adventurous, who live every second of life with excitement and enthusiasm. Sexuality means a lot. However, we all interpret this concept in our own way. Venus in Aries considers sexuality as initiative and a certain aggressiveness.

Such men like initiative girls, but not the easily accessible ones. It is rather a type of hunter who loves to play and win girlish hearts. Of course, for a complete picture you need to take into account the position of the other planets.

Venus in the woman’s natal chart – what’s your charm? 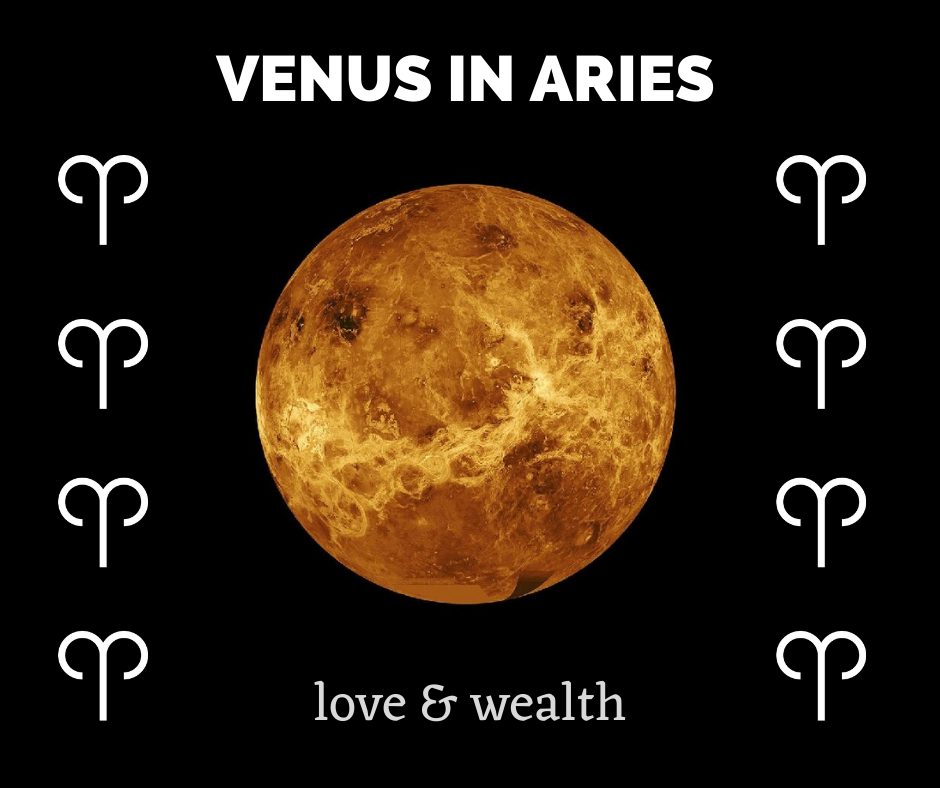 Venus in Aries clearly hints that the routine work aimed at growing long-term projects is not for you. However, this is not the only way to get rich 🙂 People with such a position of Venus in the natal chart can become successful leaders, inspirers. And this is also a very important role. However, in order to get the result, it is advisable for you to cooperate with the people of the “earth” so that they would insure you in moments of energy recessions.

In addition, you have every chance to be successful in art. After all, your hot emotions, splashed out in your artworks, are very infectious and can hit the public to the depths of the soul.

During this transit passions run high 🙂 We all become more emotional, arranging “tempest in a teapot” sometimes. During such a period, naturally, more conflicts arise, you can easily offend someone. However, after the transit is over, resentment will quickly be forgotten.

Depending on the quality of aspects, Venus in Aries can be very favorable. So, people become more active and persistent in achieving their goals. This is a great time for the manifestation of leadership qualities, for courageous actions, which you have long thought about but didn’t dare before. It is better to work precisely on those goals that you set before the transit. Because under its influence, you can spontaneously and impulsively mess things up.

If you already have a love relationship, this transit will arouse passion in them and add peppercorn. If you are single, you can easily find a partner. This relationship is unlikely to be long-term, but it will definitely be bright, sensual, and remembered for a long time.