Venus in Capricorn has every right to be called the iron lady of the horoscope. Venus is a planet that symbolizes the feminine principle in each of us, responsible for our values, love relationships, and ways to achieve wealth. Capricorn is the most disciplined sign of the Zodiac, a professional in his field, striving for authority and the top of the career ladder. Let’s see how the location of Venus in Capricorn in the natal chart affects a person’s character.

Venus in Capricorn in the natal chart – values

Values ​​are our priority in life. It is what we rely on in making all our decisions day in and day out. Venus determines our values. If it is in Capricorn in your natal chart, you will especially appreciate such concepts as responsibility, devotion, and a sober mind. In other words, a sense of duty and a promise made to someone will always be more important to you than your emotions.

The second value is a serious attitude to any work and professionalism. Capricorns do not tolerate superficiality. If you do something, do it efficiently! And another value follows from this – the thirst for recognition of authority, status, career achievements, and material well-being. Capricorn is associated with the 10th house of the horoscope, and this house is responsible for career and professional growth. Therefore, these categories will always be important in the life of a person with Venus in Capricorn.

Love and relationships in the natal chart

Despite the coldness, restraint, and career ambitions, such people, of course, also need a love relationship. Although, in the case of Venus in Capricorn, I would rather call them not love but a partnership. You will not see a riot of passions and emotional romantic gestures here. But, if Capricorn marries, then he guarantees his soul mate absolute devotion and loyalty.

However, do not think that Venus in Capricorn is the insensitive Snow Queen. On the contrary, a lot of emotions are raging in the soul of such a person. She is quite vulnerable and sensitive. In fact, he uses external coldness and restraint for self-defense and tries to control his feelings to avoid mental pain.

Venus is the goddess of love, so she plays an important role in love relationships between people. So, in the natal chart of a man, Venus indicates which woman does he like. And in the chart of a woman – her special charm, which helps her to attract the attention of the opposite sex.

If in a man’s chart Venus is in Capricorn, he will like strong, domineering, tough women. The bosses who achieved everything themselves. Disciplined, organized, ambitious. He will not suffer from coldness and restraint in the manifestations of the feelings of his chosen one. On the contrary, such a detached and even callous behavior will prompt him to chase his beloved again and again.

Venus in the woman’s chart – what’s your charm?

If you are a woman and Venus is in Capricorn in your natal chart, it’s cool! You are a very strong personality who has everything to achieve the success of any kind. You know how to set goals and achieve them, and if you can do it at work, use the same approach in personal relationships. Perhaps this advice will seem strange because everyone says that a woman should be soft and weak in a relationship. But you know what? I do not think so. There is only one thing that all people must do – to be THEMSELVES. Do not try to be someone else. You are beautiful and unique, and many people in this world can appreciate it. 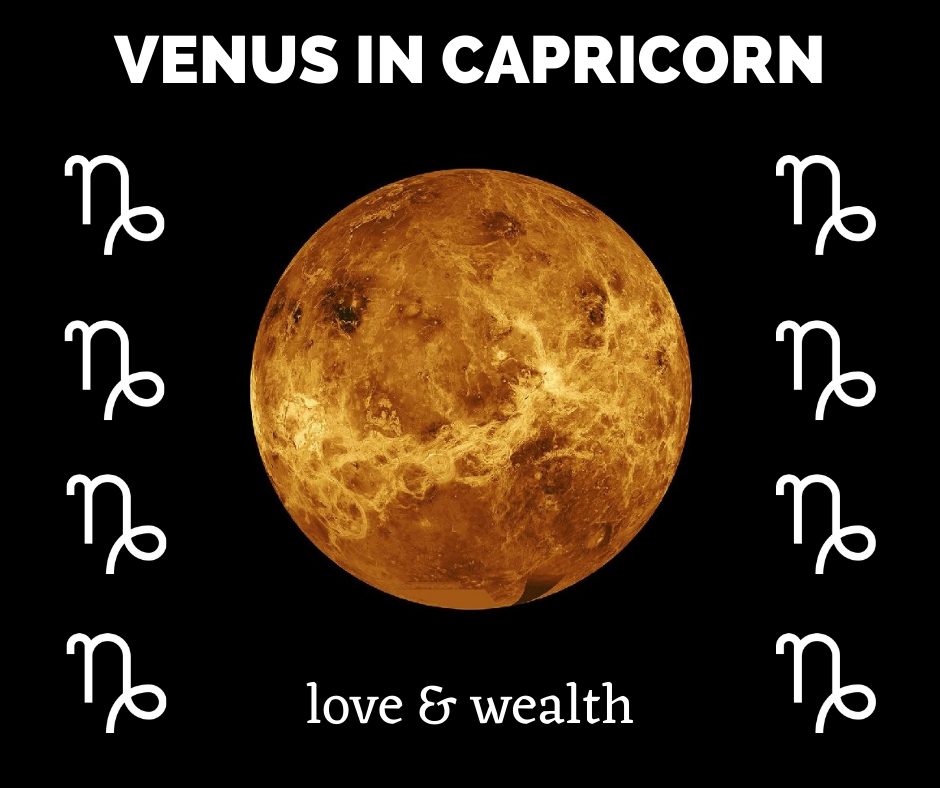 Material well-being is an important issue for people with Venus in Capricorn. Venus tells us the most harmonious ways to attract money following her Zodiac Sign. For the sign of Capricorn, these are years of hard, responsible, and high-quality work. It is unlikely that you will be able to win the lottery or get an inheritance, but systematically climbing the career ladder, you can achieve stable and reliable success. Any managerial position suits you because you are very organized and are great at organizing other people. You can choose absolutely any field of activity, and whatever you choose, end up in top management.

Most likely, wealth alone will not be enough for you – Venus in Capricorn requires respect and recognition of your authority. Well, you can achieve it just by being yourself – a real professional in any business.

On the days when Venus passes the sign of Capricorn, all people react to it in one way or another. Even if Venus is in a different sign in your natal chart, during this period, you will become more restrained in expressing feelings, and a sober mind will prevail over emotions.

This time is great for making important decisions, as illusions dissipate, and we see reality as it is. If you start a new relationship during this time, it will be long, lasting, and serious. By the way, the transit of Venus in Capricorn is a great time for marriage. And, in general, the conclusion of any contracts and business transactions.

If, during such a transit, Venus has negative aspects with other planets, cooling in love relationships may occur. Men can use their position to persuade subordinates to have a love affair, and women can use their charm to achieve career goals.

So, distribute your forces correctly in order to get the maximum benefit from each transit in the sky.