Venus in Pisces is extremely empathic, romantic, and gentle. This Zodiac Sign is famous for its intuition, subtle psychology, and rich imagination. Venus, in turn, is the planet responsible for human values, love relationships, and material well-being. Let’s see how the location of Venus in Pisces in the natal chart affects a person, his character, and destiny.

Venus in Pisces in the natal chart – values

So, Venus is the ancient Roman goddess of love, and she determines everything that we love, what is important to us, our values ​​and priorities. The most important thing in a person’s life with Venus in Pisces is a romantic relationship. Lonely Venus in Pisces, which is not in love with anyone, loses the sense of life and falls into depression. She needs love, even if it is platonic or unrequited. After all, this is what inspires her the most. Unfortunately, this value often leads to self-sacrifice, the subordinate position in the relationship.

The second value, closely related to the first, is to be accepted by society, or by some of its representatives, being oneself. The fact is that people with Venus in Pisces are much more sensitive, extraordinary, and creative than many others. People say about them: “He lives in a world of their own fantasies,” and I think it’s great! After all, it is to such people that humanity owes the greatest works of art and unusual innovations. However, there is a downside to the coin – few people can appreciate it. As a result, Venus in Pisces often suffers from the fact that the world does not understand and does not accept her.

If the values ​​of such a person are not satisfied, he suffers deeply and tends to fall into all kinds of addictions – more than other signs of the Zodiac.

Love and relationship in the natal chart

Of course, Venus’s main field of activity is love relationships! She is the Queen here. Moreover, in the natal chart of a man, Venus indicates which women attract his attention. And in the chart of a woman – her special charm. Let’s see what Venus in Pisces tells us about men and women.

A man with this position of Venus in the chart is fascinated by sublime and mysterious women. He is attracted by their compassion, subtle mental structure, keen intuition, rich imagination. The favorite type is a fragile, romantic, gentle, and submissive girl. The best way to get his sympathy is to listen to him, demonstrate understanding and acceptance. These men, for the most part, will not skimp on romantic gestures. Love is very important for them, so they will gladly surround their lady with care and attention. But, as soon as they feel that they are not understood, they will be very offended and withdrawn into themselves.

Venus in the woman’s chart – what’s your charm?

If a woman has Venus in Pisces, she is unlikely to be alone for a long time. She has all the qualities of a woman in the classical sense: tenderness, softness, flexibility, intuition, the ability to maintain a hearth, and inspire a man to exploits. She is the personification of Yin energy, the master of the water element. If you want to understand what is the strength of such a woman, take a look at the water – the one that wears away the stone and takes on a variety of forms; the one that gives life to all living things! 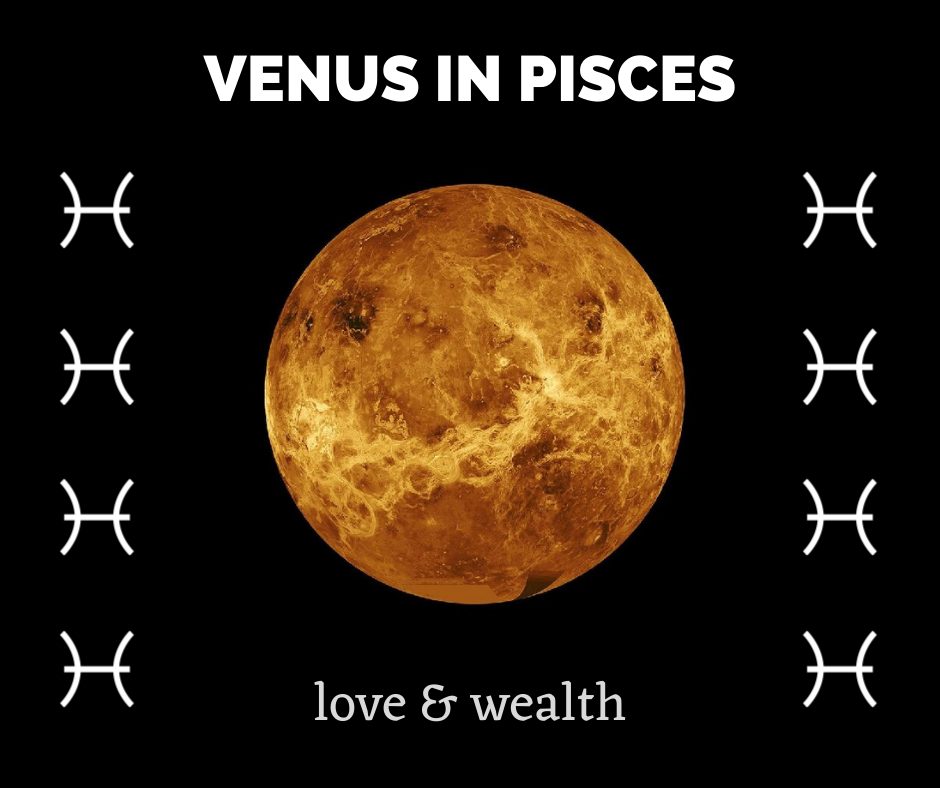 Venus in Pisces kindles a craving for pleasures, luxury, beauty, and sophistication in a person. Because of this, material goods play an important role in the lives of such people. However, Venus not only seduces but also endows everyone with the potential to achieve wealth. Each person has their own unique path to financial success, and the Venus Zodiac Sign tells us what it is. So, in the case of Pisces, creative energy will serve as a magnet for money, which can, in particular, splash out in any form of art.

Also, outstanding psychological abilities and highly developed empathy will help such people become successful psychologists, psychiatrists, and teachers. And, of course, Pisces opens the door to more subtle worlds, which are engaged in by esotericists, astrologers, lithotherapists, and so on and so forth!

During the transit of Venus in Pisces, all people feel its influence. Even if you have this planet in a different Sign of the Zodiac, at this time, you will become a Pisces for a little bit 🙂 First, intuition and empathy will sharpen. Think in advance about what matters you need these qualities to benefit from this transit. Secondly, this is a great time to start a romantic relationship or bring romance to an existing partnership. Thirdly, it is a good period for the manifestation of creativity and the generation of new non-standard ideas.

With negative aspects of Venus in Pisces, one should be wary of conflicts in relationships and addictive substances. In such a transit, people become more vulnerable, and it is easy to offend them with a careless word, which can destroy the relationship forever. You should not abuse with sacrifice for the sake of loved ones – it is better to engage in purposeful charity. Venus in Pisces can encourage a tyrant-victim relationship, as well as accelerate the fall into dependence on anything: a person, gambling, cigarettes, alcohol, and so on.
So, distribute your forces correctly in order to get the maximum benefit from each transit in the sky.